The long abandoned Radetzky-barrack will be renovated and transformed into a hotel and office building over the next two years. The interior premises of the BEM Center office building is envisaged by Studio This. The concept is based on the building’s rich history and one of its former functions, the granary – which is the starting point of life. 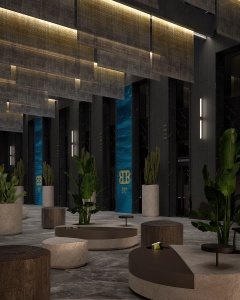 In the heart of Buda, right in the middle of Viziváros, a unique hotel-office building complex will come to life based on a synergy that aims to revitalize the local property selection. The original façade of the formerly Radetzky-barrack will be restored, paying tribute to the building’s former functions while also meeting the expectations of the 21th century.

A hotel will take place at the side of the institution that faces the Bem square while the rest of the building will function as an office building from 2023. As part of a project run by the capital, the Bem square will be renovated as well in order to serve again as an important community center for locals and visitors.

Granary in the focus

The general planning of the formerly Radetzky-barrack is carried out by the 3h architectural firm led by Zsolt Gunther and Katalin Csillag while the architectural concept of BEM Center’s interior design is envisaged by the designers of Studio This, Tímea Hadnagy and István Ulmann. They have designed the gate of the office building, the lobby, elevator forecourts and secondary premises – and according to needs, they will also contribute to design certain rental premises.

“The architectural concept is based on the building’s rich and diverse history. We travelled back in time to thoroughly research it, and from the former functions, we decided to put the granary in focus: food storage has been a major function of every age as it means consciousness in life. We wanted to create such a conscious structure in the main premises as well, where the different historical momentums, materials and surfaces, create a unity with their own diversity as heterogeneous elements.”– says István Ulmann, co-founder of Studio This.

Tímea Hadnagy adds: in accordance with the concept, the usage of the clean elements and natural materials dominate, such as black marble and limestone furniture.“We put great emphasis on using local materials as much as we can to enrich the interiors with the products and arts of Hungarian manufacturers and artists.””.

Among other things, a spectacular suspended ceiling, coming to life in the form of a curtain-like metal gauze, will add to the uniqueness of the building. The building’s history will also resonate at many points: in the elevator lobby, a map-like relief will pay tribute to the former ages while visitors will have the chance to have a look at the historical ruins of the building.

The combination of natural light and artificial lighting will contribute to the atmosphere as the goal is to give the premises the grandeur they deserve. The natural light entering the building from all directions will perfectly compensate for the elegant, darker tone interiors.